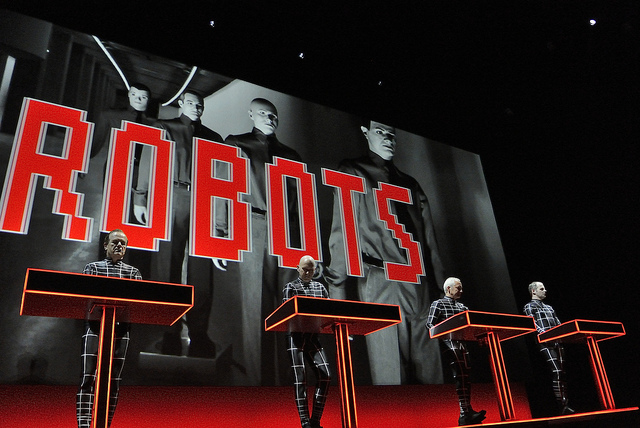 Best band ever? Most votes would go to The Beatles, The Rolling Stones or Led Zeppelin. Wrong. The answer is Kraftwerk. Here’s why:

1. Listen to any pop music station; go into any clothes shop; absorb an advert; dance in a club – chances are that the music you are hearing has been influenced by Kraftwerk.
2. Kraftwerk have a European, rather than American, sensibility. There is nothing wrong with American popular music – some of it is great. But Kraftwerk don’t ape Americana, they sing from their own culture and in the process, they influence the culture of others.
3. Unlike the Stones say, Kraftwerk have given to black American music, rather than taken from it. Just listen to any House or Techno. Kraftwerk will be in there somewhere.
4. Kraftwerk’s blend of the folk music of the past with the found noises of the present creates music that still sounds futuristic. The Beatles always sound like the 1960s. Kraftwerk’s time has not yet come.
5. Tired of the chest beating, male posturing of rock? Tired of the consumerism and homophobia of hip hop? Tired of the phoniness of The X Factor? Turn to Kraftwerk – always kind, always gentle, always inclusive, always real.
6. What links Derrick May, David Bowie, Donna Summer, Daft Punk, Afrika Bambaataa, Madonna, New Order, Autechre to just about all the best pop music of the last forty years? Answer: It isn’t Led Zeppelin.
7. “Trans Europe Express”

Read this interesting Telegraph article about Kraftwerk by Paul Morley